The Garden Prepper
Home Information About Vegetables Cucumbers How Do You Know When to Pick a Cucumber? What to Know

When you have your vegetable garden, you probably know how much effort you have to put into it. You’ll need to prepare the site, water, and weed your plants so it bears good fruit. This includes cucumbers as well and harvesting it is worthwhile as you get a refreshing treat.

But how do you know when to pick a cucumber?

Don’t let all the hard work and preparation you put into growing your cucumbers go to waste! Read on as I show you when to harvest cucumbers so you don’t let them overripe. 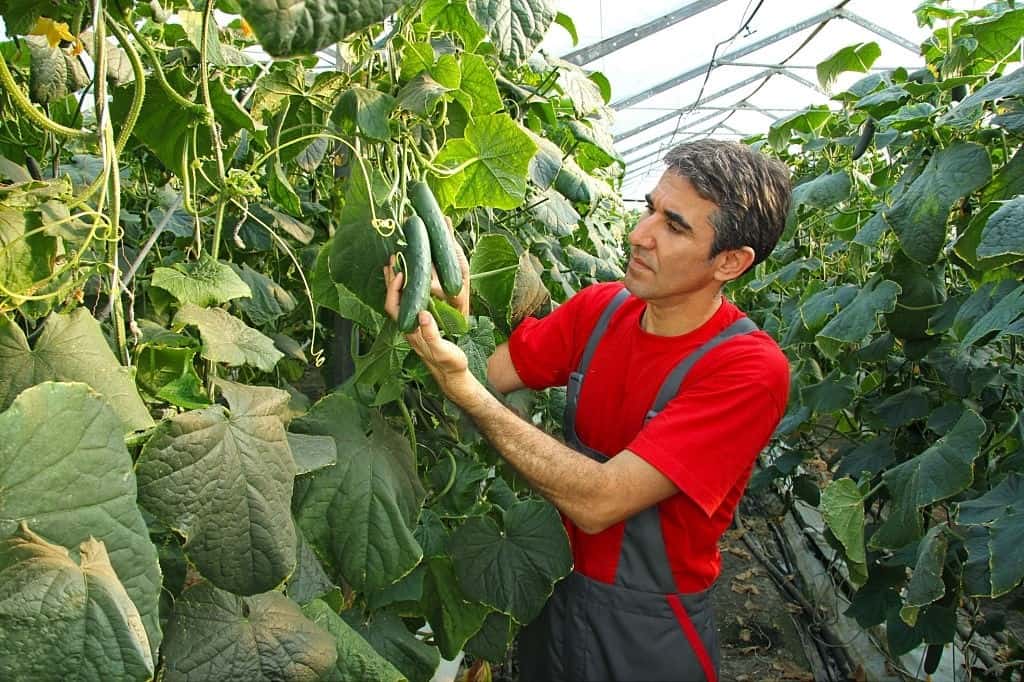 How Do You Know When to Pick a Cucumber?

Most cucumbers are already up for harvesting about 50-70 days after its germination. This goes for both vining and bush cucumbers, and you can even pick them before they ripen. However, this depends on the variety, as some would grow quicker than others, so make sure that you check the see packer or plant tag.

If you bought seedlings from your local garden center, there isn’t a way to know when exactly the plants have germinated. But that’s fine, as there are other ways to tell when you should harvest the cucumbers.

Here are the signs to watch out for:

1. The Length and Color

As mentioned, picking a cucumber would depend on its overall size, namely its length. Here’s a guideline to know when your cucumber is ready, based on the variety:

Don’t let the cucumbers grow TOO large. Some gardeners would leave their cucumbers on the vine until they grow until 16 inches long.

While there isn’t anything wrong with this, it’s best to pick it when it’s about six inches, as they taste the best when done so. If left on the vine for so long, you have fewer cucumbers AND they may develop a bitter taste!

Most cucumber would have dark green skins, though others may have lighter skins or even touches of yellow and/or white. BUT, be wary when your cucumber turns yellow, as this is usually a sign it’s overripe.

When they turn yellow, they are way past their prime, tasting bitter. Don’t let them turn yellow or larger than expected, as this would ruin the fruit.

Usually, it should have a nice medium to dark green color, feeling firm when squeezing it gently.

If you can, you can check the seed packet or plant tag to see how large the cucumber variety should be before harvesting. They will also show you what color the cucumber should be.

When harvesting fruits and vegetables, people always advise to get them when they ripen.

Do cucumbers ripen when you pick them, though? Yes, they do!

But unlike other fruits, cucumbers won’t continue developing after harvest. Ripe cucumbers would have firm and green flesh, with the exact size depending on the variety (as I mentioned before).

You can also slice a cucumber open to taste it. You’ll know the rest of the cucumbers are ready to harvest when it tastes crisp with softer seeds. The area around its seeds needs to have a jelly-like consistency.

Furthermore, the seeds should NOT be hard, not should the fruit be too seedy. Thin cucumbers would usually have fewer seeds than those with thicker diameters. That’s why it’s best to select smaller ones and pick them out rather than leaving them on the vine.

During the peak of the harvesting season, you’ll be getting ripe cucumbers ever one or two days. I recommend that you pick cucumbers early in the morning so the vines are cool.

Note that cucumbers will not ripen after picking them, so be sure to pinch its flowers about 40 days before your area’s first expected frost date. This will have your plants put all its energy to ripen any cucumbers still on the vine.

Why should you pick cucumbers almost every day though?

This is because the more you pick, the more cucumbers you’ll receive! When you see the female flower appearing on the vine, it will only take up to ten days for cucumbers to grow to its mature and ready-to-harvest size.

After all, it’s much better getting 20 small and ripe cucumbers during the harvesting season rather than less than ten cucumbers that may not taste as good.

Do you want to learn more about when to harvest cucumbers? Check out this informative video:

Now that you’re familiar with when to pick cucumbers, the next question is: HOW?

When picking cucumbers, it’s pretty easy, since all you need to do is to snip it with a gardening tool. Some gardeners would also just grab the cucumber and twist it, with the fruit popping off the vine immediately! But I recommend that you use scissors instead to avoid pulling off the vine.

When doing this, place your scissors around a quarter-inch above your cucumber, snipping it from the vine. Support the cucumber carefully (avoid thorns) as you cut to keep it from failing and brushing. Fortunately, the stem is easy to cut, not requiring a lot of force.

Once you’ve picked your cucumber, rinse it off and consume it any way you want to!

If you leave your cucumbers on the vine for too long, it becomes bitter, developing tough skin and seeds. That’s why it’s crucial to harvest your cucumber at the right time, according to the cucumber variety you have. Furthermore, make sure you care for your growing cucumber crops for tastier cucumbers!

I hope that this article answers your question, “how do you know when to pick a cucumber?” Now that you know the answer, be wary with your growing cucumber plants to ensure a successful harvest!

Cucumber Plant Flowering Too Early? Here’s What You Can Do About...

Why Are English Cucumbers Wrapped In Plastic? The Answers Here!

A Quick Guide on How to Make Cucumbers Grow Vertically